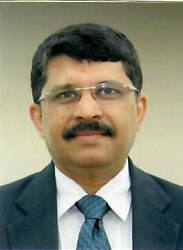 P. Venugopal carries with him 35 years of experience working in the Life Insurance Industry in India having joined Life Insurance Corporation of India (LIC) in August 1984. He has spent major part of his career on the marketing side - conventional, Bancassuarance and Pension & Group Schemes verticals. He has also managed LIC’s investments having worked in the Investment Department of LIC for four years.

He has a great passion to impart insurance awareness and insurance education to all in order to provide insurance protection and thereby increase the insurance penetration in the country.

He has travelled widely within India and abroad during the five years he was the Secretary General, Insurance Institute of India, Mumbai. He successfully coordinated the signing of MoUs by the Institute with many institutions within India and abroad notable ones have been the MoU with the Financial Regulatory Department (FRD) of the Government of Myanmar and subsequently with the Myanmar Insurance Association (MIA) of Myanmar to promote insurance education in Myanmar.